"Sado", also known as "chanoyu", is the traditional, ritualized preparation and serving of powdered green tea by a host for the enjoyment of his or her appreciative guests. In "sado" there are various prescribed ways of preparing the tea, accepting and drinking the tea, sitting, bowing, standing and walking that make up the etiquette of the tea ceremony. This etiquette was established for the host to show hospitality to the guest and provide them with delicious tea, and for the guest to receive this hospitality and enjoy the tea.
The tea ceremony is not merely a matter of the host serving the guest some tea and the guest drinking it; it can be seen as a comprehensive art form blending the spiritual elements and thought behind the interaction of host and guest, and the aesthetic elements designed to enhance this, such as the tea room and garden, the way the tearoom is arranged, the selection and appreciation of the tea utensils, the food served and the etiquette governing its procedures.
Moreover, the tea ceremony's philosophy of hospitality towards guests has parallels in modern-day Japanese hospitality. In the tea ceremony, it is important to experience the spirit of hospitality as well as to enjoy the tea.

The history of the tea ceremony 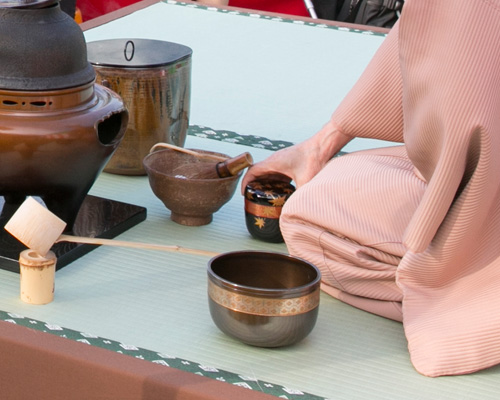 Introduced from China, in the Kamakura period (1185—1333) tea-drinking spread along with Zen Buddhism throughout Japan through Japanese Buddhist priest Yosai, who brought both the Rinzai school of Zen Buddhism and the custom of tea from China to Japan. Although Chinese made tea accessories and informal tea gatherings using them were in vogue during the Muromachi period (1392—1491), Juko Murata (1423—1502) developed the "wabi-cha" style of tea gathering which employed Japanese tea utensils called "wamono", and incorporated a spiritual element into the interaction between host and guest. Reverence for tearooms, teahouses and utensils that were showy and extravagant also gradually shifted to reverence for simple designs and objects with spiritual value.

Thereafter tea ceremony master Joo Takeno (1502—1555) followed Juko Murata as a proponent of "wabi-cha", and his pupil Sen no Rikyu (1522—1591) perfected the principles of "wabi-cha" in the Azuchi Momoyama period (1573—1603). Sen no Rikyu's philosophy is said to be the cornerstone of modern-day "sado" and "chanoyu".

To date, many different schools of Japanese tea ceremony have evolved which still enjoy wide popularity today, including the so-called "san-Senke" ( three Sen houses/families) of Omotesenke, Urasenke and Mushakojisenke developed by Sen no Rikyu's descendants.